My maternal grandfather, Mr. Mike as he was known, passed away in 2008 at the age of 104.  Yesterday, October 9th, would have been his birthday.  These are the words I spoke at his funeral four years ago.

“As you can see, I’ve written a book. But, before I start, let me say one thing. Looking around at this incredible gathering, the one person I know who’s having the time of his life, wherever he may be, is Michael Khaleel George Azan.

My name is Reema and I’m Mr. Mike’s granddaughter. My mother is Y., Miss U as she’s known in Spaldings.

I hope, as C. and I speak, you’ll hear the echo of the many voices speaking with us today, the voices of all Mr. Mike’s grandchildren and great-grandchildren.

When I asked my 7-year old son what he remembers most about Grandpa Mike, he answered: “He was very old and he sat a lot.”

I know how lucky my son is to have known his great-grandfather well enough to have memories of him.

But I’m sad he didn’t know Mr. Mike the way my cousins and I did.

Mr. Mike, until recently, was not a guy who sat a lot: he loved to move, he was loud, he was vivacious, passionate, strong, loud, he loved to travel, he was loving, full of energy, brimming with confidence, and … loud. 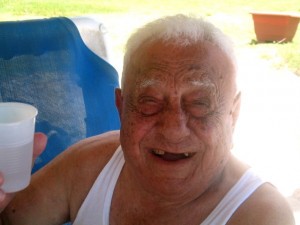 Grandpa Mike was a force of nature and it seems only fitting that we remember him today, September 10th, which I’ve read is the peak day of hurricane season.

He was a man of the earth. Born in Lebanon and living in poverty, he once told me he “walked four year barefooted.” His footprints are embedded in the very soil of our world: in Europe as he made his way to his new island home in 1922, in Jamaica – his home for 86 years, or in Canada and the United States where he visited family.

He was a man who enjoyed the bounty of the earth. If there ever was a man who gloried in the pleasure of food – and was deeply thankful for every mouthful – it was Mr. Mike.

In the morning, he would have a glass of water, a cup of hot strong coffee and two bananas. And that was before breakfast. My cousin D. remembers him in the kitchen, in his white undershirt, mixing Fatoosh, a Lebanese salad, in a huge aluminum bowl to feed members of the family who would gather around the tables set end to end to accommodate everyone.

On Friday nights, Uncle V.’s family would travel up to Spaldings for dinner. V.’s son remembers how Grandpa Mike made him feel special by making sure that even as a child he was included in the conversation.

It was that ability to make people feel special that made Grandpa Mike such an expert salesman, or as my cousin G. says, “he could sell water to a fish in a pond”.

No one who knew Mr. Mike could deny that he had fire in him. You know that if there was music, it wouldn’t be long before he’d get up to dance.

At his 100th birthday celebration, my sister  remembers how his eyes twinkled as he watched a belly dancer perform. When he tried to join her, his children urged him to remain seated. He shrugged them off, got up to dance, twirling his white handkerchief around and around.

Mr. Mike loved his family fiercely, and he had a temper, one that chased many a customer out of his store.

I remember visiting Jamaica as a young girl of 11 and being utterly fascinated by the store. I remember it as a dim cavern of treasures: men’s fabrics, women’s fabrics, cotton panties, housewares, lace, thread, mixing bowls, brooms, ribbon, and buttons.

My favourite part of the store was the mezzanine where there were boxes and boxes of shoes, some easily twenty years old.

I remember the magic of the place: it was a dragon’s den and Mr. Mike was the fire-breathing guardian. He used his voice to bellow his disapproval, and my cousin D. remembers that he also used brooms, pots and pans, and even shoes which he threw down the street after the people running away.

Mr. Mike was so physically strong. My cousin L. remembers his “hugs were so tight you thought he broke a rib and the kisses that were so hard, I swore his beard cut my face open.”

He was also a man of beliefs. The essence of his philosophy, as described by my cousin S., was his love of God, his love of family, and his love of friends.

I believe that part of Mr. Mike’s longevity was his innate curiosity about the world and an appreciation for all the things in it. This is a man who had no formal learning, but he was always asking questions.

And he never seemed to forget a thing. I once asked him to tell me about Spaldings when he first arrived. According to the notes I made, here’s some of what he told me: “Eggs was 6 pence a dozen, meat was 6 pence a pound. A big loaf of bread was 9 pence. 9 pence was money.”

Earth. Fire. Air. These, according to ancient philosophers, are considered the principal elements of nature along with water. I like to think of life as a river. You’ve got to jump in and go with the flow.

Most of us are tempted to reach out and grab a branch or a log to get to safety. Not Mr. Mike.

I believe he was fully immersed in the river of life and trusted the current to carry him.

The word hero is thrown around a lot in our world. But sometimes I think the most extraordinary people amongst us, the true heroes, are those like Mr. Mike, who live in contentment, who take joy in their family and friends, and who work on behalf of their community. Who ride the ups and downs of life, who take the good with the bad, and who smile every day.

Mr. Mike used his voice to share his stories with all of us. Sadly, we’ve lost that voice. He didn’t have the ability to capture those stories with words on a page, but he had pictures. He was obsessive about pictures. I think that’s because they were his diary, his journal, his testament. He could look at them and say: “I’m a good man. I’ve lived a good life. These are the ones I love and this is my life’s work.”