Three days ago, I posted a photo of what I’d made for dinner on social media. It received likes, hearts, compliments, and requests for the recipe.

I’m pleased to share that recipe with you now albeit with hesitation.

Because I learned to cook from my mother and my grandmother and they didn’t use recipes!

So take this more as a guideline for preparing Fateh al Laban (laban is the Arabic word for yogurt). Make the dish your own by experimenting with the proportions and the seasoning. There’s a vegetarian option, too, that Mom developed. I’ll describe that alternative after I’ve given you the details for preparing the traditional dish.

There are six components to Fateh: croutons, chickpeas, pine nuts, ground beef, yogurt, and herb garnish. I find it easiest to serve the components separately. Each diner can then assemble a plate according to their likes and dislikes. That also means the leftovers keep better than if they’ve been mixed together. 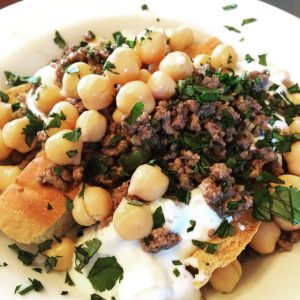 Croutons
Take two loaves of pita bread. Separate the halves of each loaf and tear them up into bite-sized pieces. Spread on a baking sheet covered with parchment paper and cook in a 350˚ oven until golden brown. Remove and set aside. Regular croutons will work but then you’ll miss out on the Lebanese look!

Chickpeas
Open a small can of chickpeas. Drain and rinse the chickpeas. Let them sit in a colander to dry until you’re ready to serve.

Pine Nuts
Fry a handful of pine nuts in butter until golden. Remove and set aside. Alternatively, mix them with a touch of olive oil and bake in a 350˚ oven until golden brown. Pine nuts burn easily, so check on them frequently if you have them in the oven.  If you’re frying the pine nuts, turn off the heat just as the pine nuts begin to brown.

Ground Beef
I typically use .5 kilogram (1 pound) of lean or extra lean ground beef for two and that leaves a lot for leftovers. Fry the ground beef in a pan until cooked through. Season with salt, pepper, and allspice (no more than 15 ml, 1 teaspoon, of the latter). You can also add chopped jalapeño and a few drops of Worcestershire Sauce. Drain and keep at room temperature. As I’m writing this out, I realize that it would also work to mix the pine nuts in with the beef. I might try that next time.

Yogurt
Use approximately 250 ml (1 cup) of plain yogurt. It doesn’t matter which brand you choose or whether the yogurt is skim, 2%, or whole. I’d recommend the 2% or whole — just make sure it’s plain and not French Vanilla! In a mortar, crush 1/2-1 clove of garlic with salt, pepper, and a few, washed, shredded fresh mint leaves. Add the spiced garlic paste to the yogurt and mix thoroughly. You can also mix in diced cucumber to the yogurt mixture for an extra bite.

Garnish
Finely chop a green herb to use as garnish. I use cilantro because L. likes the flavour; parsley is the traditional option. You could also use mint or a combination of any or all three.

And that’s it. Seriously. Those are the components and once they’re ready to go, layer them in a bowl and dig in! I prefer to put the croutons on top rather than using them as a base so that they stay crunchy. If you place them under the yogurt, they get soggy pretty quickly.

Sahtain — bon appétit in Arabic — and let me know how your version of this dish works out.

For me, this dish is one of my comfort foods and L. loves it, too.

As with so many things, to share this dish with you is to share memories of Mom and to honour her legacy.  Thanks for requesting the recipe. 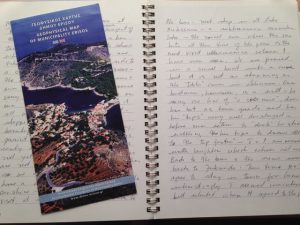 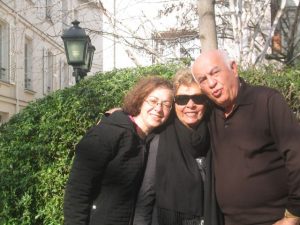