I’m very pleased to be back at Simon Fraser University (SFU) this term as a Teaching Assistant (TA) with the Department of English.  I am leading two tutorial sections for English 104W – “Introduction to Prose Genres: Digital Perspectives on Canada’s Media History and Messaging as a Prose Genre” with Dr. Paul Matthew St. Pierre.

For those of you who follow me on Twitter or on Facebook, you may guess why I’m particularly excited about being a part of this course. Given how much time I currently spend on social media, the course is a way to consider my online practice in a historical and cultural context.

I anticipate that the course content will support what I’m doing, it’ll challenge what I think, and it’ll motivate me to ensure my social media activities are pursued in an even more thoughtful manner.  With three lectures done already, I foresee that Dr. St. Pierre may be setting the stage for us to consider our time on social media as “work” within the digital sphere and electronic devices as the tools by which we complete that work.

To think of my time online as work adds a whole new dimension to my role as a digital citizen.

Aside from grounding my social media use in this context, I’m really excited about having the opportunity to work with undergraduate students again. 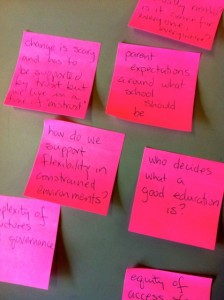 It’s not because of the marking, which is likely my least favourite aspect of the job, although assessment is important in the university environment.

It’s not for the office I get to use since it’s remarkable how infrequently students stop by to visit.

It’s not for the authority which the position bestows upon me although it’s wonderful to be able to think about the tutorial sessions as “my classes” and those enrolled as “my students”.

It’s because as I work with the students I feel — I hope — I’m making a contribution to their learning.  From exhorting them to look up words in a dictionary, to pushing them to care about writing, to asking them to see beyond the words on the page (or on the screen), I’m trying to show them that they have agency in this world.

And in working with them, I recognize that I value my work as a TA because it allows me to do the same with regard to my own agency.

It allows me to recognize the following:

That’s likely the best description for this past week.  Not that I haven’t been busy.

My week comprises many elements, and they were all in play this week:  being a Mom, working at SFU, participating in my Masters seminar, and doing my volunteer work not to mention meetings, social gatherings, social media monitoring, and chores.  Sometimes I’m just boggled at what we cram into a week and, yes, social media monitoring now constitutes a significant portion of my daily life and warrants being designated as a time commitment — sometimes too much so!

It’s been a week since the municipal elections were held and I was elected a Trustee for the West Vancouver Board of Education.

First, there was the muted euphoria of November 19 — final results weren’t posted till 1:00 a.m. the following Sunday morning.  Then, the declaration of the official results was made on Wednesday — a low key event attended by precisely three people in addition to the two members of the Legislative Services department:  me, my son, and a West Vancouver resident who plays a key part in our community and who was instrumental in one of the municipal councillor campaigns.

I was in limbo because I’d been elected, but didn’t feel like I was doing anything to fulfill the requirement of my new role — aside from trying to catch up on my sleep and wade through the detritus of a five week campaign which still decorates my office like flotsam and jetsam after a storm.  It wasn’t until Thursday when I met with Chris Kennedy, the district Superintendent, Carolyn Broady, the other first-time trustee, and had a tour of the district office that the situation began to feel real to me.

And now the wheels are beginning to turn with the promise of much more work in the coming weeks and the growing realization that I have been entrusted by over 3,700 residents of West Vancouver, Bowen Island, Lions Bay, and other GVRD areas to represent their interests in safeguarding, maintaining, and improving the public education system in our communities.

I’ve always voted, in every election at every level, and yet my own experience as a candidate ensures that I will be even more diligent about how I prepare for voting in the future because I understand, with greater insight now, what an act of faith it is to cast your ballot in favour of one candidate or the other.

I am anxious to get started and recognize the steep learning curve ahead of me.  It’ll take time to get a good grasp of what’s involved, but I’m not concerned because I enjoy tackling new situations and look forward to the new experiences ahead of me.

However, there is a troublesome issue, a feature of our public education system, which is likely to colour the work I’ll be doing.

One of the new skills I’m developing is the use of Twitter to engage and connect with a wide range of people in all fields of work.  My involvement with this social media platform, through the discussions I’ve had with new connections, has really shown me the extent of the rift in the public education sector in our province — it is rife with mistrust and anxiety.  There also seems to be an ongoing tendency to demonize the stakeholders on either side of the bargaining table and I can’t help but feel that it’s counterproductive.  How will we ever be able to work together effectively when whatever settlement is reached comes with such rancour?  And this at a time when the Ministry of Education is consulting on what is meant to be a new direction for education to ensure the best for British Columbia’s students in the 21st century?

I guess I’m about to find out how that will affect the work I’m able to do in an effort to fulfill the expectations of all those who’ve expressed their support for me with their vote.  More importantly, those who are looking for me to deliver on my commitment to help ensure the strength of a system which has a direct impact on the life experience of their children.

I will do my best.