In June 2013, a Grade 8 teacher invited me to participate in an event she had organized for her English class.

I accepted, with no qualms, to be a talking book. That is, an individual with whom students could converse.  A living book providing real-time dialogue.

On the day of the event, each living book was guided to a different spot in the Rockridge library. The students, in small groups of five or six, rotated from one station to the next on a timed basis.  They had spent time preparing for their roles as interviewers and the evidence of how much time their teacher had spent helping them get ready was clear.

Many of the questions they asked me focused on education.

“Is high school the best years of our lives?”  One of my favourite questions, to which I answered, “No.” In my view, I explained, high school may be a pinnacle of experience for some, but it was not necessarily so for all.  It hadn’t been for me. 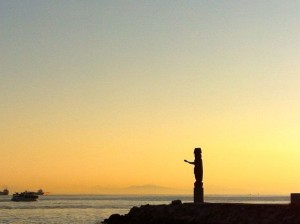 One young woman asked for my advice on how best to prepare for university. I didn’t mind this question the first time it was asked, but by the second or third time it was broached, I’d had enough.  I suggested that since they were only in Grade 8 they may be better served by focusing on what they had to do now.  They had time to agonize over the rest.

There was one question which resonated with me the most.  I remember it as “what do you think is the purpose of education?”  but in her thank you letter the young woman who’d posed the question wrote it down as “what makes you so passionate about education?”  The exact form of the question doesn’t matter because it was her interpretation which has made this into a cherished memory.

“Your answer shocked me.  It was not an answer that I expected.  You are not passionate about education because you think it makes people smart for a better job in the future, that was what I expected.  Instead, you said that education makes us better people. … This is a moral that I will carry with me for my upcoming school years.”

And I do; I believe that education is about making each of us better.

That’s why the chorus for choice in the public education system sometimes rings false.  Because those who sing that chorus the loudest are trying to draw a straight line from their children’s education, even as far back as kindergarten and earlier, to success in their lives as adults. There are connections and correlations between the two, but I believe we do a disservice to our young people when we present life as a simple equation of “if you do this, then you will get, or you will be, this”.

Life is complex and nuanced.

And that can be a shock.

And in the face of a shock like that, sometimes all we have to rely on is being the best person we can be.