I walked around my son’s school yesterday to thank each teacher for their work and to express how sorry I was at the way events are unfolding in public education in British Columbia.

Because I value teachers and the work they do.  Because these teachers, whether early in their careers or with many year’s experience, are caught up, as I am, in forces seemingly beyond our control. 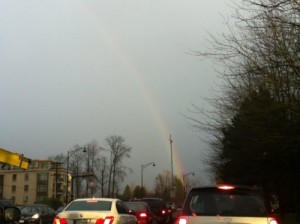 We are spectators to a drama that is playing out on a stage where provincial representatives, whether union or government, cannot find a way to talk to each other.  In the absence of dialogue, labeling and name-calling have become the norm.  In the absence of a willingness to work towards compromise, brinksmanship has become the norm whether by using the media, social media, or the mechanisms of legislation.

And as much as it is being said that teachers are not shown respect, I feel respect is not being shown towards others in the educational community such as administrators, Trustees, or parents.  This disrespect has pervaded the discourse and was on display during George Abbott’s recent Twitter chat.  Whatever you may think of the man, his role, and the government he represents, were the derogatory personalized attacks warranted?  If you call him a bully or see him as one, is the appropriate response to bully him?

So if our system is dysfunctional, which only serves to harm the interests of those it’s purporting to serve, is there another way forward?

During a recent liaison meeting with administrators, we watched a TEDTalk by Seth Godin in which he talks about starting movements to bring about change.

I’m not sure how and I’m not sure when and I may not be the person to do it, but I would like to start a movement for change in the BC public education system.

To start, I would like to call for a Royal Commission on Education.  There hasn’t been one held in BC since 1987, the results of which were captured in a 1988 report entitled A Legacy for Learners.

While expensive and time-consuming, I believe that this high-level, independent, wide-ranging forum is the only way we can capture the big picture of education, its purpose, its link to society, and the way in which its objectives can be fulfilled in the best interest of the students.

I would also suggest, as our understanding has grown over the last 25 years, that a more holistic approach be taken. To truly effect societal change we need to consider education as only one component in a child’s life which links to health and socio-economic well-being among other factors. This would be one way to capture information from other Ministries which may lead to conclusions and recommendations that are transformative in the way we structure programs and services which most affect children and families in this province.

After all, it’s all about the children, isn’t it?