December looms. The last month of the year. I can only wonder how it is that 2013 has just over four weeks to go.

The months have flown by, the year has evaporated. Like the contrails of planes which soar overhead, all that’s left are lingering impressions of passing through space and time.  I know I started there and I know I’ve ended up here, but I’ve lost the texture of the days and won’t remember all the details of my experiences along the way.

Time’s not going to hesitate in its relentless march to give me back the days or weeks or minutes or seconds I wasn’t able to enjoy or forgot to savour.

Time doesn’t care, but I do. 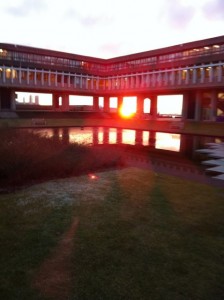 Because the end of the year means the end of the semester at Simon Fraser University (SFU) and while time may not care that it’s left me breathless with its bruising speed, I do care about having to say goodbye to the students I’ve been working with since the first week in September.

There are any number of reasons for me to be ecstatic.  Once exams are over and grading is done, I won’t have to contend with the agony of marking.  Once the last book has been read and the last office hour held, I may be able to reintroduce balance in my day to day activities.  Once the demands have lessened, I might be able to capitalize on a few extra hours of sleep.

I have many reasons to celebrate.  But here’s the thing.  All of those reasons and more are trumped by this one truth: I treasure working with undergraduates even if they hand in papers late, even if they won’t contribute to a class discussion, even if they haven’t done the reading, even if their writing skills are still in development, and even if they don’t care as much about the course as I do.

Based on concentrated interactions over 12 to 13 weeks, even if it’s just for 50 minutes each week, a connection is established although not with every student and not always successfully.  A rapport grows among the members of each tutorial group, a sense of common purpose.

And for me the most rewarding moments are those times during a tutorial session when I can actually see the students thinking.  When it seems like they are puzzling over a new idea, a new concept.  Of course, they may just be squinting at the clock in anticipation of being released from the torture of sitting in yet another classroom with yet another TA droning on about something or the other.  Maybe.  But more often than not, I feel they’re giving serious consideration to the material at hand.  They are learning and their horizons are expanding.

My time with these students is rapidly coming to an end and I’m incredibly appreciative of the time I’ve been privileged to spend in their company.

It may be brief, it may be over all too soon, but it’s time well-spent.