Here are some numbers I came across while preparing for an upcoming presentation:

What does this all mean?

I think it means that even in our developed Western world, where gender inequalities are not as apparent as they may be elsewhere, there’s a lot of work to do in sustaining women’s rights and in working towards a better, more just society.  There are worrying indications and further support to be found for this need in articles such as this one from The Globe & Mail on the reduction in the number of women appointed to the judiciary.

My focus here is not to talk about the broader social policy issues — at least not today — but I would like to address what I think this may mean in terms of educating young men and women, boys and girls.

Let’s look at what some consider the three levers of our modern society — money, politics, and the media — and some subject areas or topics which could be incorporated into or emphasized in the curriculum.

On the premise that the more you understand money and how it works, the better you’ll manage your own financial situation.  Are we teaching enough about: 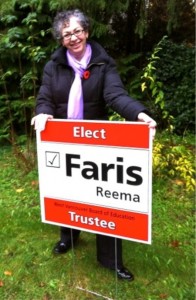 Unless you learn why politics is important, how our system works, and its history, you’ll never see or understand the relevance to you and the world you live in.

It surrounds us, it influences us, it continually evolves and changes.  In a recent CBC documentary, Naomi Wolf, author of The Beauty Myth, says she finds media images of women getting worse, reinforcing unrealistic expectations and norms.  Are we doing enough to educate students about the media — advertising, movies, music videos, song lyrics, newscasts, etc. — and the influence it has on our behaviours and attitudes?  Did you know that misogynist comments on-line are starting to drive female journalists and bloggers off-line according to a recent article in the UK newspaper, The Guardian.  Women’s voices need to be heard and represented, not shrouded in the silence of earlier eras that would negate the work of great Canadians such as Henrietta Muir Edwards, Nellie McClung, Louise McKinney, Emily Murphy, and Irene Parlby.  http://archives.cbc.ca/on_this_day/10/18/

There are many other ideas and initiatives we could pursue and explore.  Paying attention to these three areas would be a start because the issue of women’s rights is an issue of human rights — not just abroad, but here at home.